As I described in a previous post, I built a simple Teensy-controlled battery tester for Lithium Thionyl Chloride batteries. I had noticed that unused batteries that had been laying around, seemed to have high internal resistance and according to Wikipedia, this can be due to a passivation layer that forms on the anode and which causes a “voltage delay” when put into service.

I decided to test this using the battery tester. What I did was to modify the program I had written for it so that it loaded the battery with a constant 5 mA current while monitoring how the pole voltage developed over time. I did this three times for one minute with a few minutes of pause in between for the same previously unused battery which has been stored for at least three years. The battery type is a 1/2 AA size Tadiran TL-5101/P.

Below are plots showing the how the pole voltage varied during the tests. The three curves shows the result of the initial test (red), second test ~20 minutes later (blue) and third test ~10 minutes after the second test. The first plot shows 60 seconds while the second plot zooms in on the first 3 seconds. 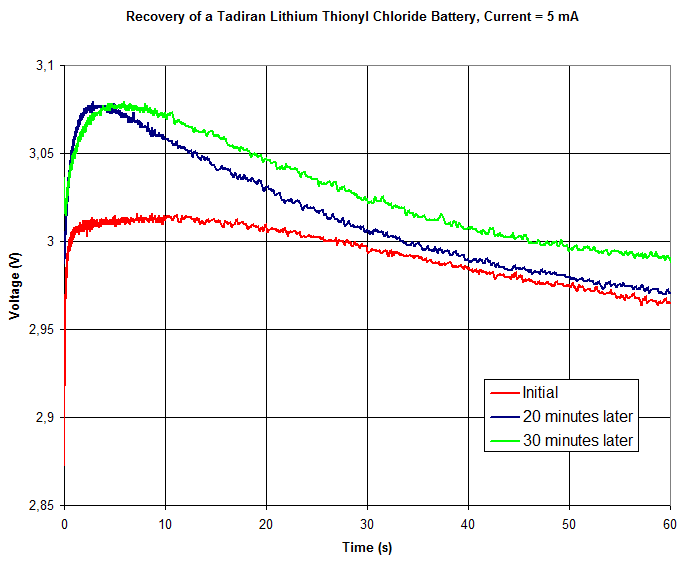 Voltage vs time during 60 s while loading the battery with 5 mA. 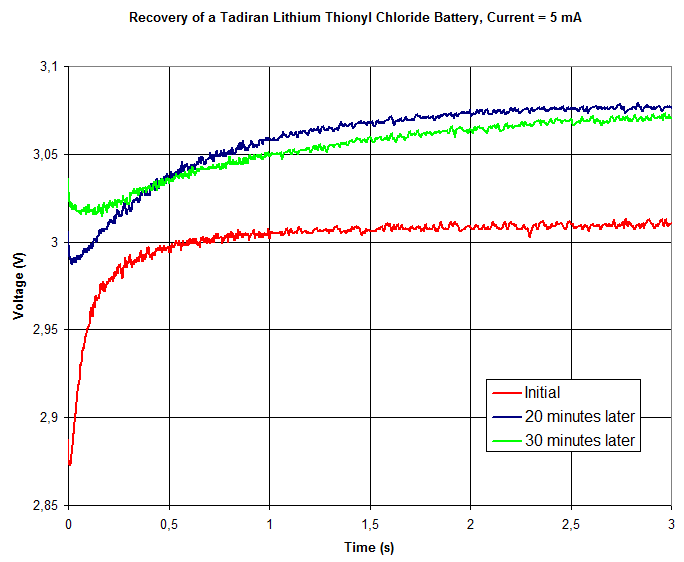 Voltage vs time during 3 s while loading the battery with 5 mA.

The pole voltage does indeed increase at first (during 3-10 seconds) while the battery is being loaded before it starts drooping. Also, the voltage under load becomes higher the second and third times the battery is tested in this manner.

So a very short and simple test under load might give a too pessimistic view of the state of a lithium thinoyl battery that has been stored for an extended period of time. It might recover and start perform better while it is being loaded. This is somewhat counterintuitive.

The Teensy program I used to for the tester can be found here.

One thought on “Voltage Delay in Lithium Thionyl Chloride Batteries”