In my previous blog post about the inductance of some decoupling layouts, I concluded that using two 0402 capacitors would (almost) always be a better choice than using one 0306 capacitor. Andrew commented that mutual inductance might have an effect and he wanted to see measurements of layouts where two 0402 capacitors were present. Fortunately, my test layout supports that and I have now made a few extra measurements to see how two 0402s in parallel actually performs.

Here is a picture of the top side of the layout with the relevant components in color. For more details about the layout see the previous blog post.

The new combinations I tested were capacitors on:

Case 1 might give some inductive coupling between the components and vias, especially on the bottom side where the vias are longer and the capacitors are further from the planes. The coupling should help reduce the inductance since the currents in the nearby capacitors and vias flow in opposite directions.

Here is an impedance plot comparing the impedance of one 0306 to that of two 0402s on the top side of the board.

The dual 0402 is the winner since it has lower impedance for all frequencies. The reason it has lower impedance at low frequencies is that the combination has higher capacitance. Interestingly though, it does not quite have twice the capacitance of a single 1 µF 0306. (In my experience, 1 µF 0402 capacitors are always a bit below 1 µF and they are also much more voltage dependent than 1 µF capacitors in larger packages. So do not count on getting 1 µF of capacitance from an 0402 capacitor, especially not if you have some voltage across it.)

Below is the table with the results of the measurements. Layouts E and G were presented in the previous blog post whereas I and J are new.

So, the prediction from the previous blog post that using 0402s is a better idea than using half as many 0306s holds up well. 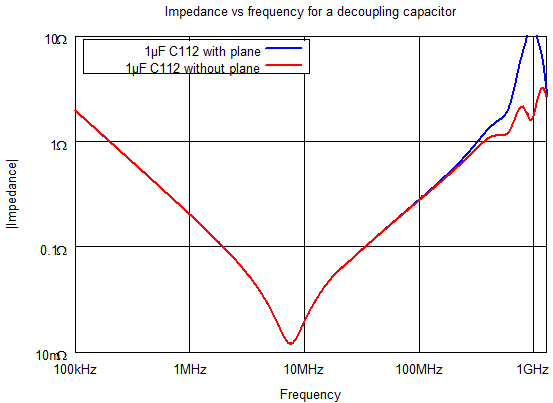