I found the three year old Tadiran batteries (TL-5101/P) that i described in the previous blog post to have too high internal resistance to be suitable for use in Sportident base stations. The datasheet of those batteries also only talk about a discharge current of up to 2 mA and the base stations use more than that for peak current. Therefore I ordered new batteries of another brand, namely SAFT LS14250 CNA. The datasheet of SAFT LS14250 recommends a maximum discharge current of 35 mA and it has near full capacity at 10 mA of current, so this seems like a much better choice for the application.

Naturally, I was curious as to what the voltage delay looked like for LS14250, so I hooked up my battery tester with the same software as before. I ran two tests on the same battery with about 5 minutes of delay in between. The plots below shows the results. 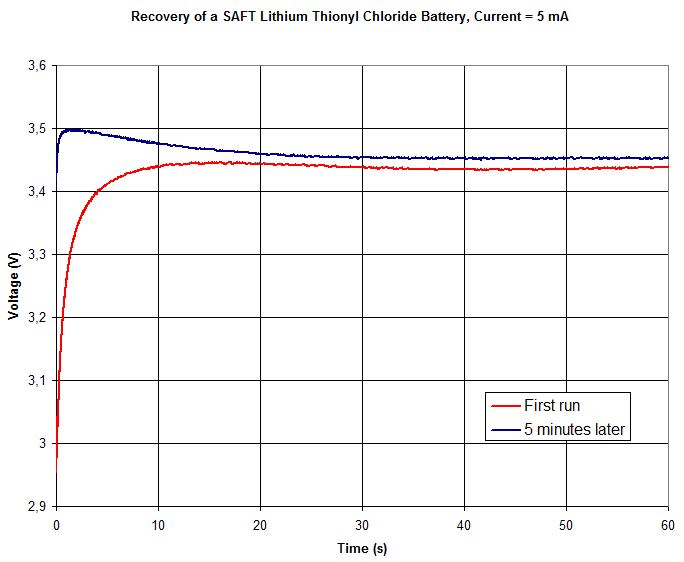 Voltage vs time during 60 s while loading the SAFT LS14250 battery with 5 mA. 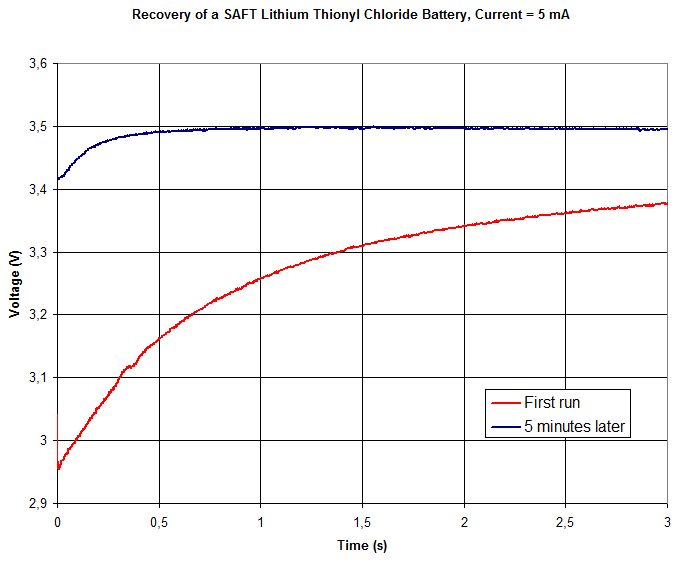 Voltage vs time during 3 s while loading the SAFT LS14250 battery with 5 mA.

In the first run, which takes place presumably at least many days (perhaps months or years) since the battery was last delivering any current), we see the voltage under load starting out at about 2.95 V and it recovers to 3.45 V after about 15 s.

So the voltage delay phenomenon is (as expected) very evident also in this battery model. Also, the SAFT LS14250 seems to be much more suited for the application than the Tadiran TL-5101/P.

I also needed to change batteries on some SI master (BSM7) units and these have AA-size (14500) batteries with higher capacity than the 1/2 AA size 14250 discussed above. I tested a new SAFT 14500 battery (which has  a highest recommended discharge current of 50 mA) twice with the 5 mA one-minute test. The results are shown in the plot below. 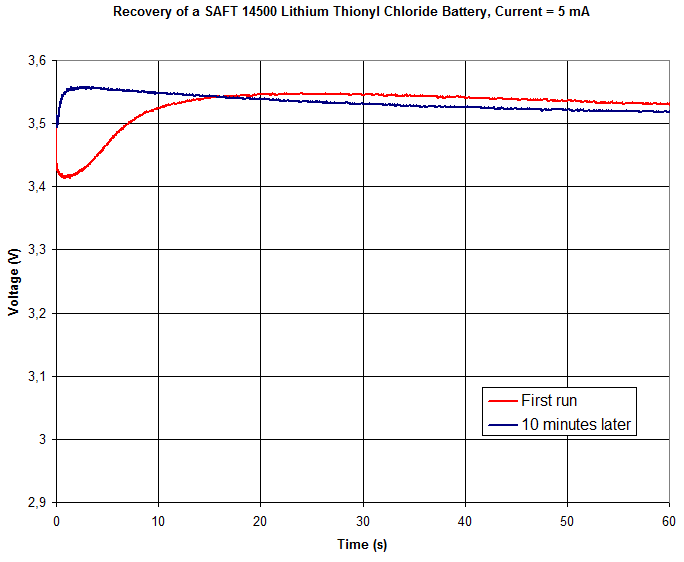 Voltage vs time during 60 s while loading the SAFT LS14500 battery with 5 mA.

The voltage delay effect is evident also in this test, but strangely enough the curves look qualitatively different compared to the LS14250 curves. In the first run, the voltage dips during the first second before it starts to recover and reaches a peak after about 25 seconds followed by a slow decay. The initial dip is a new feature.

The intricacies of battery behavior are apparently complicated, but tentatively one can conclude that a “voltage delay” effect that takes place for 1-15 seconds when the battery is being loaded after a (long) time of storage is repeatable based on the findings of these few tests.