Combining electronics and photography can be quite fun. Here is a description of a mini-project I did recently.

I have some magnetic putty that I wanted to take time lapse video of. I also have a digital still camera (Nikon D300) and a manual remote shutter release with 2.5 mm stereo jack connectors. There are remote shutter releases with time-lapse functionality built in, but this was not present on mine, so instead I decided to create the time-lapse functionality by means of an Arduino Nano. (After almost completing this post, I realized that there is in fact a shutter release timer feature in the D300 menus. Duh! So I could have used that if I had settled for having the same time between each pair of exposures.)

Interfacing to the camera is quite simple. Two open collector outputs are needed, one for pressing the shutter release button halfway (to focus) and one for pressing it all the way down to take the picture. Some experimentation showed that it is necessary to first emulate pressing the button halfway and then release the shutter. It did not work if the halfway step was skipped.

It would probably be possible to use Arduino pins directly to talk to the camera by switching the pins between tri-state (button not pressed) and low (button pressed), but I decided to use external transistors to ground the signals instead as shown in the schematic below.

Circuit for interfacing an Arduino to the shutter release cable.

The signals Release and Focus go to Arduino pins.

In addition to the camera control signals, I added a power MOSFET connected to another Arduino pin in order to control LED lighting. This might be useful when the period between pictures is very long to save power and prevent the LED from getting unnecessarily hot. In the end I did not use this feature as I suspect it might contribute to somewhat varying light intensity between shots which would appear as flicker in the resulting video. 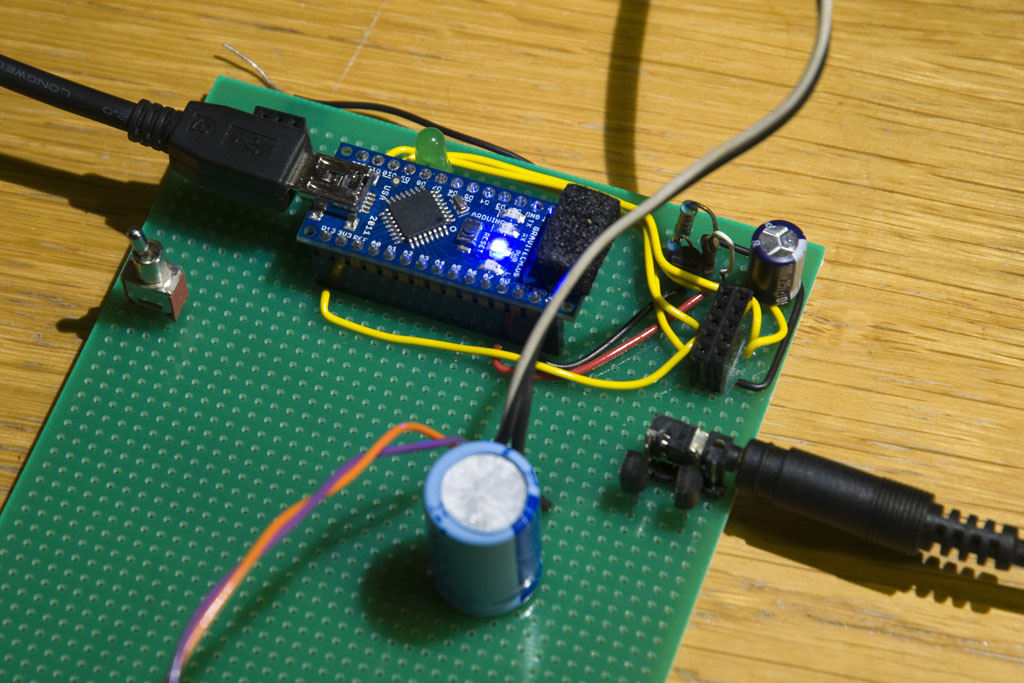 The hardware based on an Arduino Nano. The remote shutter release cable goes out to the right. Shown are also cables and a big capacitor for controlling an LED lamp, the USB cable and some unrelated circuitry.

Some code is of course also necessary. I decided to control the operation via the USB cable using the serial monitor. Since the process I intended to film tended to have the most action at the beginning, I made the intervals between the exposures longer and longer. This kind of feature is perhaps not so easy to get from a commercial remote release timer.

The code is available here.

The functionality is very rudimentary and the code should be pretty self explanatory with the few comments that are included.

Capturing the series of photos

So, now we have the hardware and software to capture the time lapse photos. What is next is to set up a little photo studio where the action can take place and configure the camera. There are a number of things to consider in this process. Here are some that I figured out:

Below is a photo of my make-shift setup under a desk. 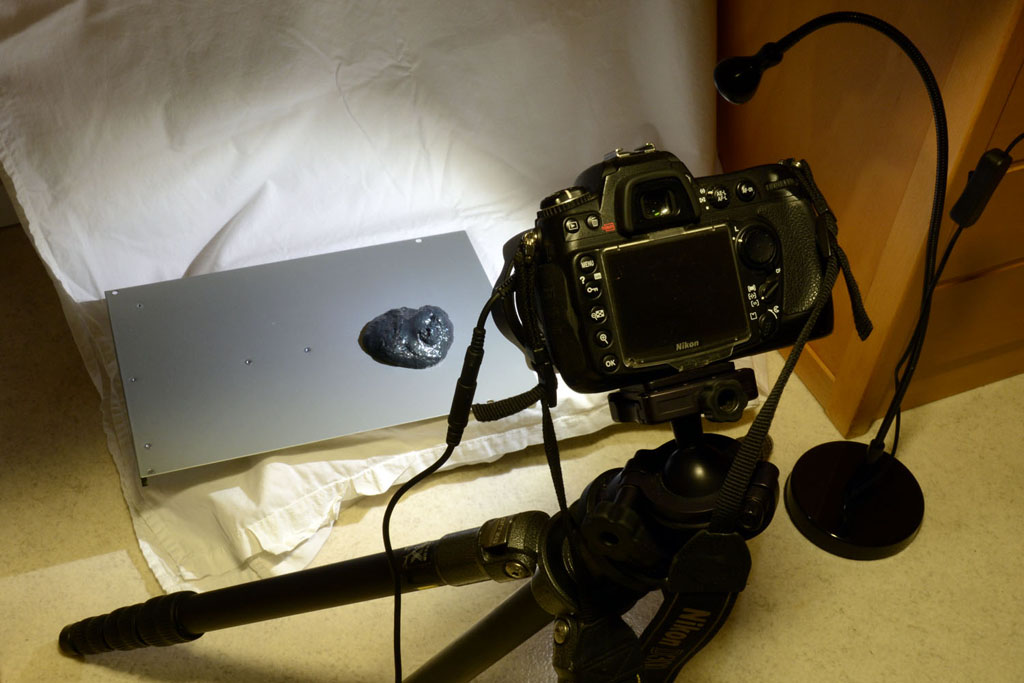 When all is set up properly, it is time to start the interval timer by giving the proper command in the serial monitor and then just wait until all the action has been captured.

I will describe how to make a video based on all the JPEGs in the next post.

3 thoughts on “Time-lapse shutter release based on Arduino”