I just bought a couple of Teensy 3.1 boards to play with. The Teensy is a pretty small processor board that looks to be quite capable. It is smaller than the Arduino Nano boards I have been using for various other projects and still it has more I/Os, is cheaper and has a much more powerful processor, an MK20DX256, which is a 32-bit ARM Cortex-M4 from Freescale running at 72 MHz with 256 kB flash and 64 kB RAM. 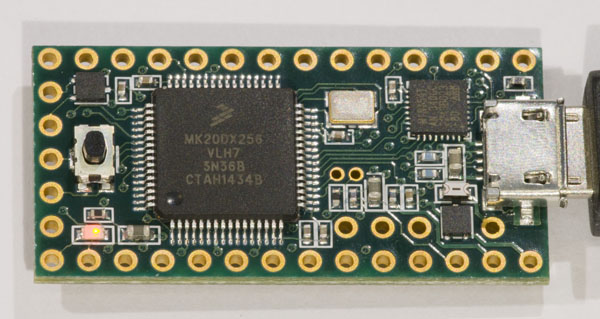 The downside is perhaps that it is a proprietary design and while the schematics is available, the bootloader running on it is not, so unlike with the Arduino Nano, it is not possible to start out with a Teensy for prototypes and then move to a custom layout while still being able to use the same bootloader.

It is possible to develop programs for the Teensy using both an adapted version of the Arduino environment as well as using Eclipse. There are quite a few libraries available, including NeoPixel, OneWire, Xbee, capacitive sensing, IR remote controls, LCD displays, PS2 keyboard input, CAN, stepper motor control etc.

To get started I took the very simple LED-blinking program Blinky and added some parameters to modify the blinking to make it easy to see if I was successful in uploading the new program. Here is the code I came up with:

Uploading of the sketch to the device turned out to be a bit messy. It seems to be necessary to press the button on the Teensy prior to uploading. Pressing the Auto button in a small window that appears on the screen might also help. Just uploading without doing anything special results in a timeout and the previous sketch being stopped.

Anyway, so far so good. Getting to the equivalent of Hello World turned out to be almost as easy as with an Arduino.

5 thoughts on “Getting Started with Teensy”