For a rather long time – months if not years – I have been plagued by a a few pieces of dust on the sensor of my DSLR camera. On a previous camera I had, I cleaned the sensor a couple of times using a special (rather expensive) liquid called Eclipse and equally special (and also rather expensive) lint-free cloth. My experience was that this wet method gave mixed results and often resulted in frustrating new patterns of dirt (streaks or new dust) on the sensor, requiring try after try before an acceptable result was perhaps achieved.

My current camera is a Nikon D300 and it has a built in sensor cleaning function that vibrates the sensor (or rather the filter in front of it). Executing this function removes some dust, but not all, so something more had to be done on this camera as well.

To see the dust in detail I took a several second exposure of a white surface while having the camera much out of focus and moving it around to get as little structure as possible from the photo subject so that just the dust would produce a pattern. Then I did “auto contrast” in Photoshop to bring out the details of the dust. The below picture is the result. A very annoying dust squiggle that had disturbed many pictures is very conspicuous along with many small dots. 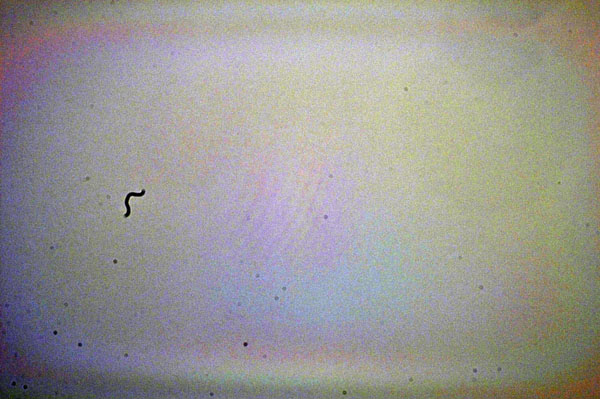 The squiggle was the most important to get  rid of, and since I did not like the cumbersome wet method very much I decided to try something different.

So I went and bought a can of “Air Duster”. Apparently this product does not contain air, but rather propane and butane, but that is probably not particularly important for the end result (as long as the ventilation is appropriate).

After a series of short blows to the sensor I put the lens on and took a new photo of the dust in the same way as before. The result is shown below. 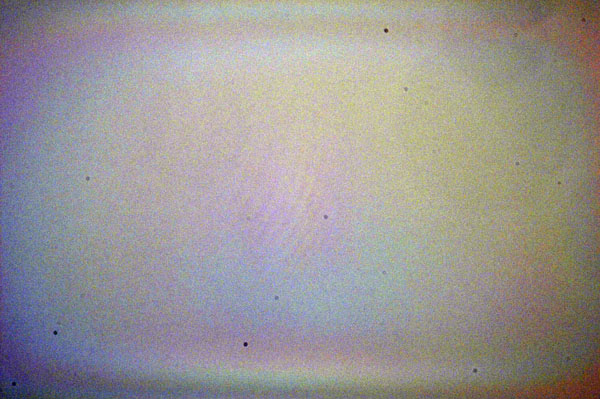 As can be seen, the squiggle is gone and so are many of the small dots as well. A few dots seem to have moved. The dots that remain are not ideal, but I have not had much issue with this kind of dust in real pictures, so for the moment I stopped at this stage. More air-dusting is otherwise likely to remove more of the dust.

So all in all I think this was rather successful and much simpler than the wet method.

Much more thorough information on sensor cleaning can be found on Thom Hogan’s site. I just wanted to put this post out there to maybe encourage other people to try this relatively effortless and inexpensive method instead of putting it off like I did for such a long time.