While I was updating the firmware of many BSF8 Sportident stations to 6.23, I had a weird failure on a unit with serial number 112297. It may or mat not be related to the voltage measurement bug described on the last page of the release notes of the 6.23 firmware, http://www.sportident.com/images/software/si_boot_firmware_623_release_notes_en.pdf. If I recall correctly, the sequence of events was this:

My guess is that a huge amount of current has for some reason flown through the power pins such that they have melted (!). I am pretty sure I did not hook up the external power supply with the wrong polarity and anyway it was current limited to 100 mA or so, so I do not think I caused this by reverse power polarity. Could it be that the processor entered into some kind of state that effectively shorted its supplies and thus consumed a large current?

I guess the reason for the bug behavior in the release notes (a voltage reading of about 2 V) might be caused by an unexpected large current consumption, so it is somewhat consistent with power pins getting destroyed. But it seems a bit unlikely that the relatively wimpy lithium thionyl chloride battery could deliver enough current for this to happen. And I am almost certain that the damage to the pins occurred before I connected an external supply. Quite mysterious.

After a discussion through a few emails back and forth with Simon Harston, we have come up with a new hypothesis that could explain the state of the station while not requiring an unrealistically large current that could melt IC pins:

If this hypothesis is correct, it explains why just the VCC pins were destroyed. Furthermore, it does not require a current that is probably much higher than the battery could ever deliver. The bluish debris that can be seen in some of the photos (e.g. on the bottom side of the board and near the resistor close to pin 1 of the MCU) might have gotten its blue color from copper ions from the corroding pins, provided the ions could somehow migrate from the pins to the other locations. The fact that the screws are clearly corroded supports the hypothesis that there was a corrosive environment inside the station at some point.

Below are some pictures of the unit. Unfortunately, I do not have a really good way of taking pictures through a microscope, so most pictures are taken through regular lenses and the one taken through the microscope is blurrier than one could hope for. 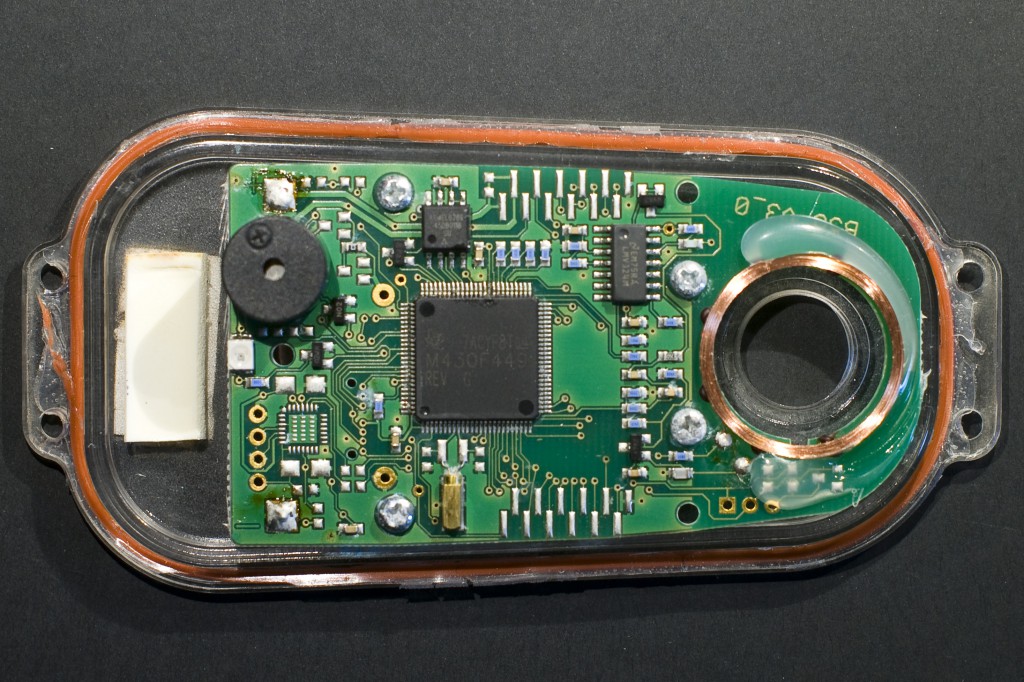 Top side of the PCB of the broken SI station. 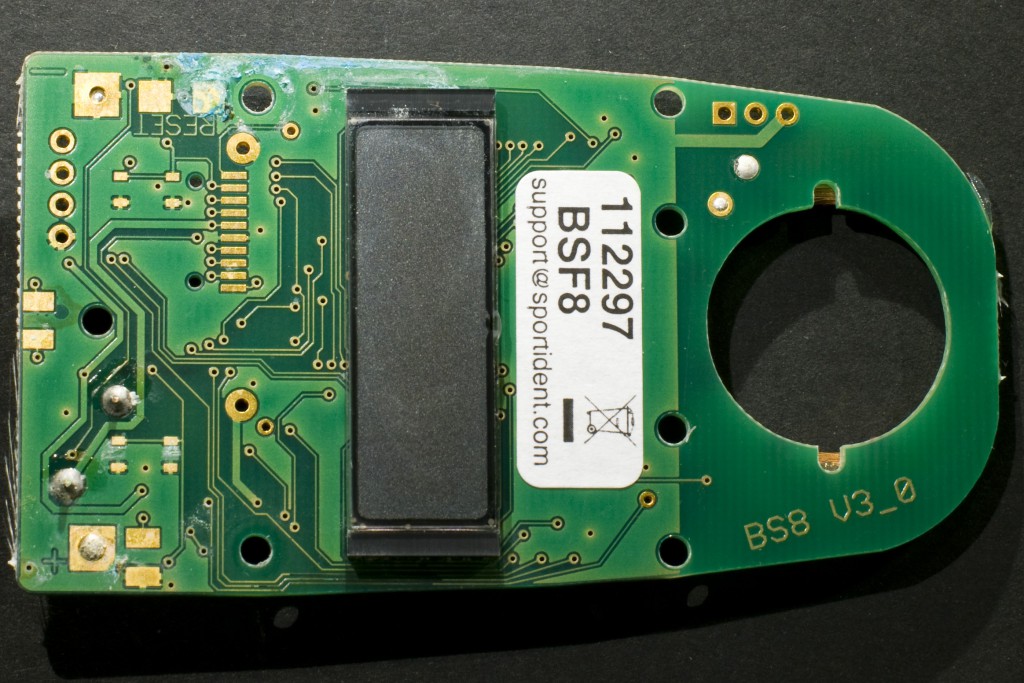 Bottom side of the PCB of the SI station. 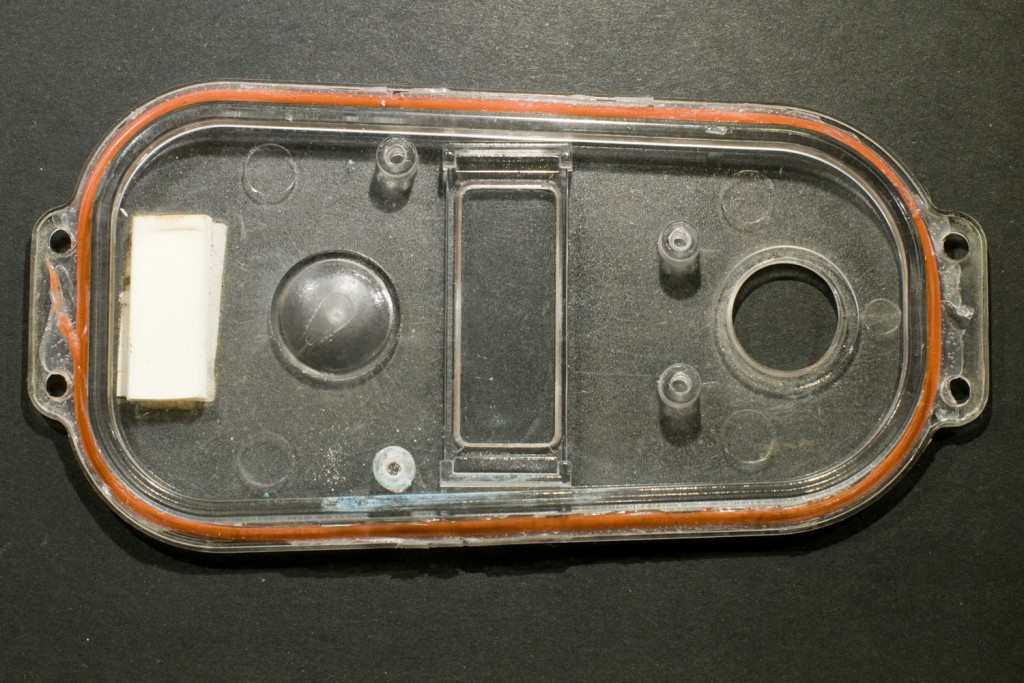 Bottom plastic cover with some mysterious blue material along the lower side. 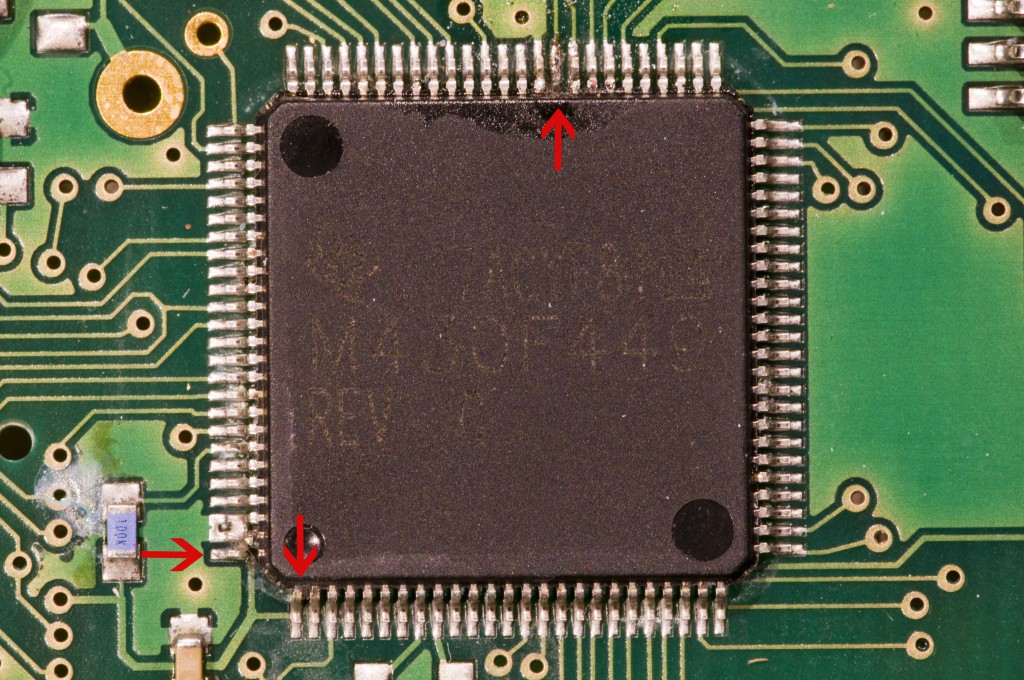 The processor with arrows pointing to the damaged pins. 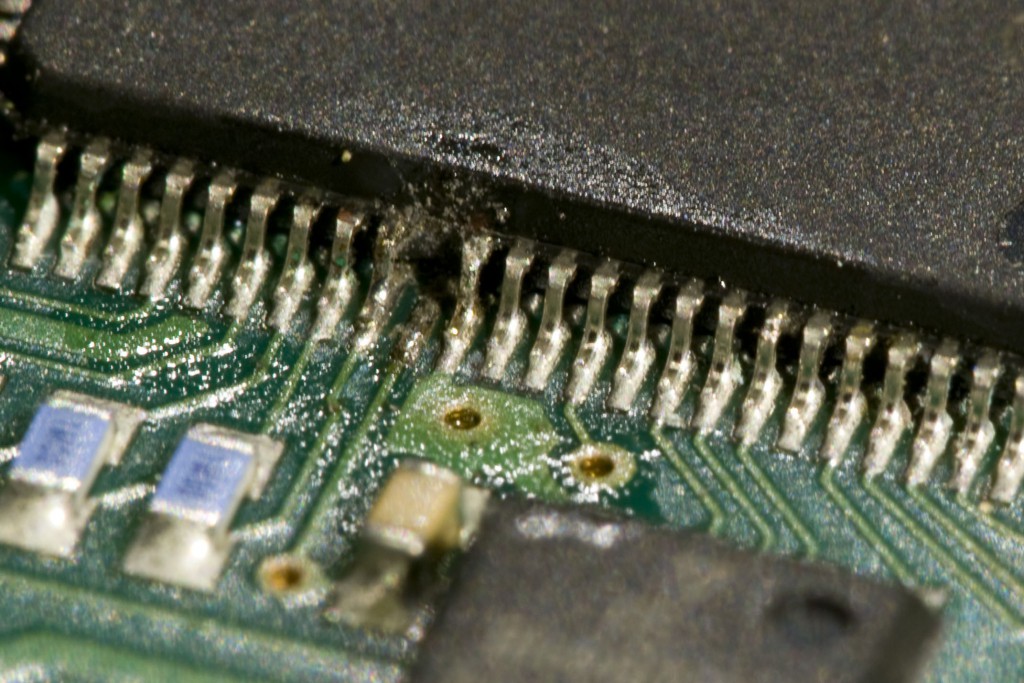 Closeup of pin 60 (after I desoldered the lower remains of the pin). 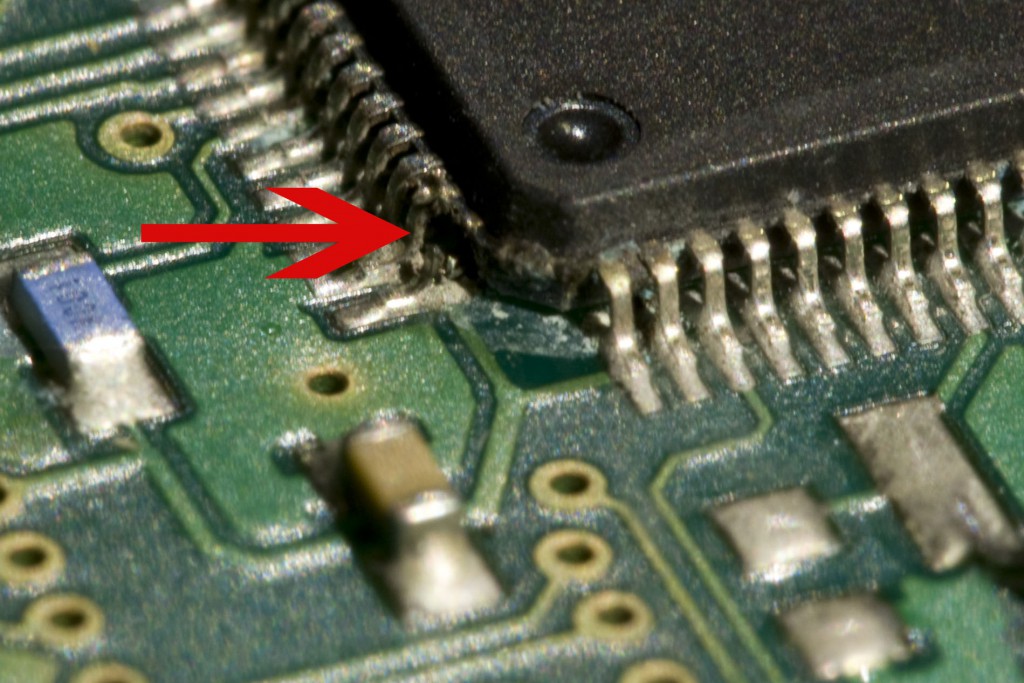 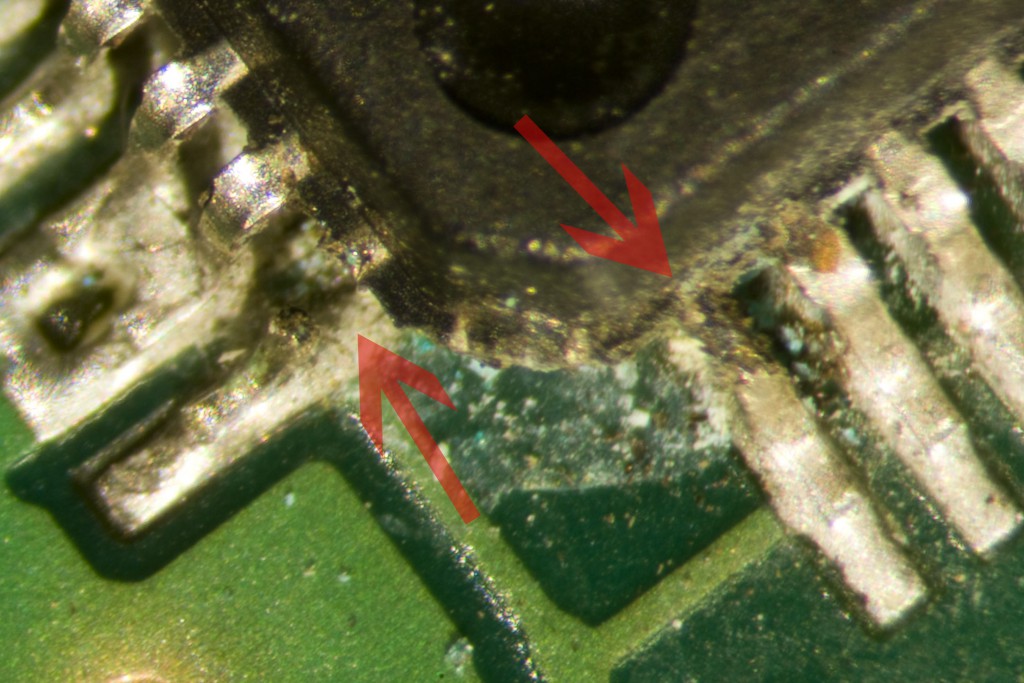 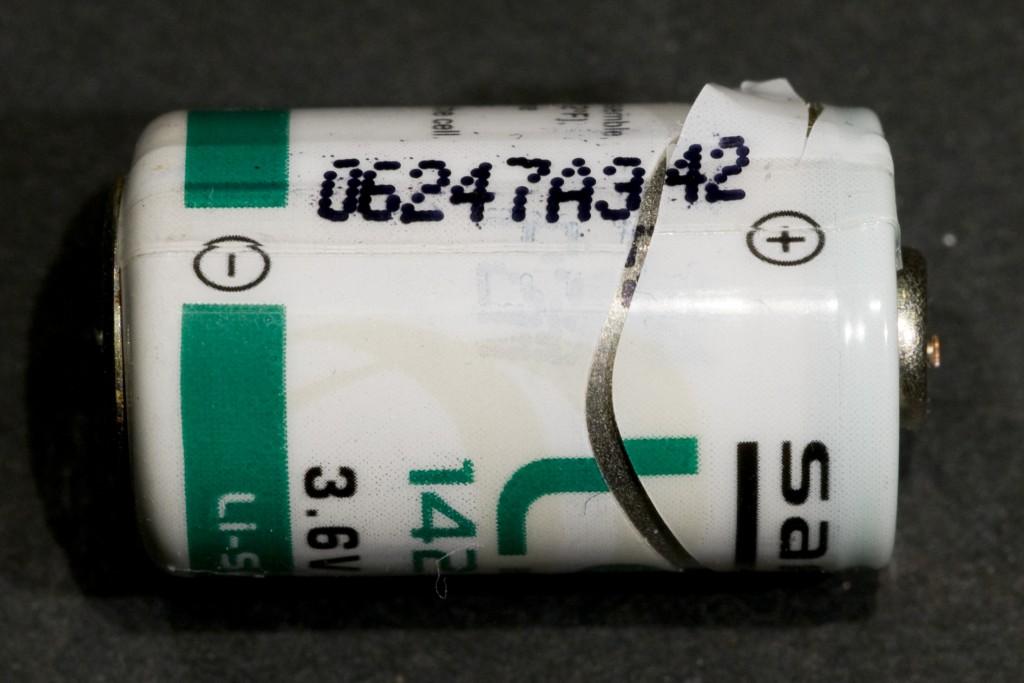 This battery with a cracked sleeve may have been in the faulty unit. I am not sure since I mixed up six discarded batteries, two of which had cracked sleeves.

One thought on “Sportident Station with Pulverized Power Pins”