An I2C bus (or SMBus) can fail to work for various reasons. A well known reason is that there may be too much capacitance on the bus causing too slow low-to-high transitions. 400 pF is the maximum bus capacitance according to the I2C specification, but this is not necessarily a hard limit in practice. The problem of excessive capacitance can often be remedied by lowering the data rate, decreasing the value of the pull-up resistors or somehow reducing the bus capacitance by changed routing, shortened cables or using a different kind of cable.

This article however describes a different and perhaps less obvious problem that can occur while running an I2C bus in a cable, namely crosstalk, and what to do about it, if it becomes a problem.

Here is a photo of the cross section of the simple telephone cable used in the experiments in this article. The labels show the initial signal assignment that were used to provide both power and an I2C bus to a temperature sensor. 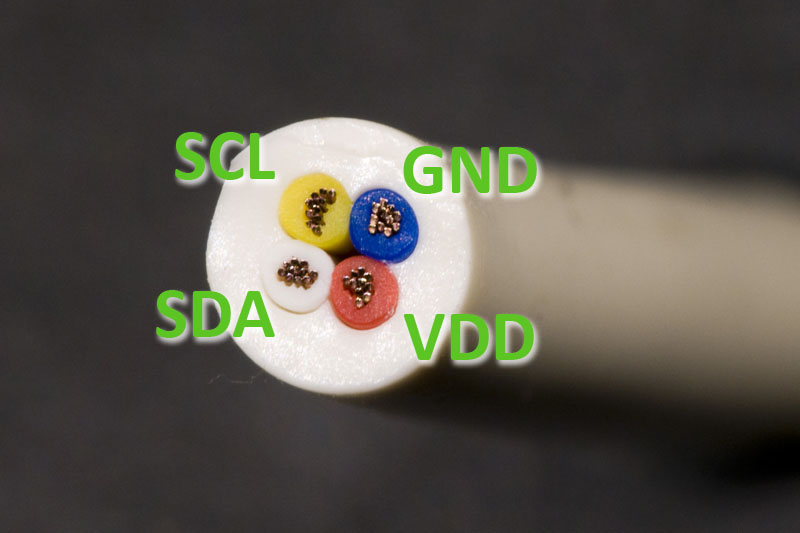 Cross section of the cable with initial signal assignment.

4.7 kohm were used as pull-up resistors. Below is a scope plot of the resulting signals when using 70 cm of cable and a data rate of approximately 200 kHz. 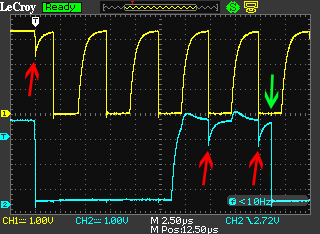 The red arrows show where one signal is disturbed by a fast transition from high to low on the other signal. The green arrow shows that no disturbance can be seen on SCL when SCL is low, despite the fast transition from high to low on SDA. The reason that the signals are only disturbed while they are high is that in the high state, it is only a relatively weak pull-up resistor that keeps the signal at its proper level, so a small amount of current injected into the signal can change the voltage quite a bit. When an I2C signal is low, it is held low by a strong transistor which has an on-resistance of only a few tens of ohms so it would require a current that is two orders of magnitude stronger to cause a disturbance of the same amplitude on a low I2C signal than on a signal in the high state.

If the negative going glitches caused by the crosstalk become large enough, they may cause the bus to fail in various ways as the signals are misinterpreted, so it is important to keep these under control. The I2C specification defines valid high logic levels as being at least 70% of VDD. 70% of 3.3 V is 2.31 V and the glitches in the plot above dip down to this level, which is bad.

The mechanism for coupling from the disturbing signal (the aggressor) to the disturbed signal (the victim) is the capacitance between the wires in the cable. A schematic model of the I2C-bus and cable (drawn using LTspice) is shown below. 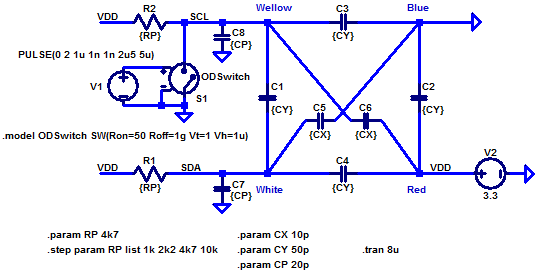 Model of the cable with I2C signals on adjacent wires.

R1 and R2 are the I2C pull-up resistors. C1-C4 are the capacitances between adjacent wires in the cable while C5 and C6 are the capacitances between the diagonal wires. C7 and C8 are stray capacitances on the PCBs as well as capacitances at the pins of the ICs. S1 is a switch that models the open-drain output of the driving pin while V1 controls when the switch is closed and when it is open. The values of several of the components are set as parameters (within curly braces) to make it easier to modify them and adapt them to the actual values of a specific instance of the circuit. The capacitances shown in the schematic are reasonably representative of the real circuit discussed above.

Below are the simulated waveforms of the SCL and SDA signals when the I2C pull-up resistors are stepped from 1k via 2k2 and 4k7 to 10kohms.

Simulated waveforms for the circuit above. The pull-up resistor value is stepped through the values 1k, 2k2, 4k7 and 10k. The smaller the resistance, the steeper the edges.

One can note that the amplitude of the glitches and the steepness of the edges match the measurement pretty well for the 4k7 pull-up resistor (the next slowest traces). This supports that the model is fairly accurate.

We can see that the initial glitch in the SDA waveform has (almost) the same amplitude regardless of the the value of the pull-up resistors. This might not be expected, but is a consequence of the fact that the initial part of the step is dominated by the capacitive voltage division in the circuit. The capacitive divider consists of C1 which injects charge into the parallel combination of C4, C5 and C7. Right after the step, the voltages on the capacitors start to recover and how quickly this happens is determined by the value of the pull-up resistor, so the 1k resistor gives a ten times quicker recovery than the 10k resistor. But note that it does not significantly reduce the magnitude of the glitch.

A lower value of the pull-up resistors did not seem to do much good according to the simulation, but let’s anyway verify this in reality. Below is the same measurement as before, but with 2.2 kohm pull-up resistors. 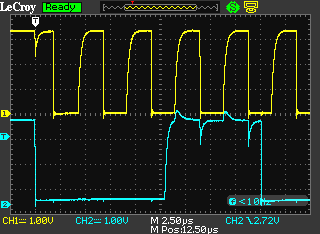 As predicted by the simulation, the amplitude of the glitches remain the same, while the positive edges have become steeper.

So, we could not reduce the amplitude of the crosstalk by the old standard trick of reducing the pull-up resistance. So is there something else that we can try?

Since the coupling mechanism is capacitive, we would like to reduce the capacitance between the aggressor and victim. This can actually be done without changing cables if we change which wire is used for what signal. To do this, the I2C signals are put on diagonal instead of adjacent wires as follows:

Cross section of the cable with improved signal assignment.

(If it had instead been a four-wire ribbon cable, putting the I2C signals on the outer wires and power and GND on the two inner had been the way to go. In a twisted-pair cable, the I2C signals should be twisted with power or GND and absolutely not with each other.)

The resulting crosstalk is shown in the plots below for 4.7k and 2.2k pull-ups. 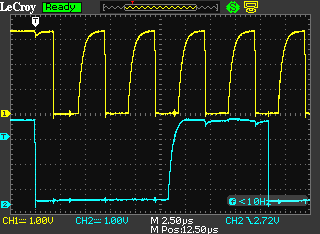 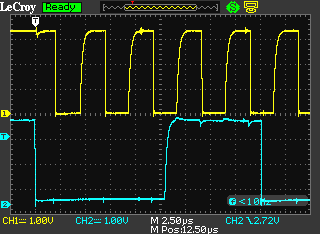 As can be seen, the glitches have been substantially reduced and are now harmless. This can also be simulated by just changing the simulation schematic slightly to move the aggressor diagonally from the victim: 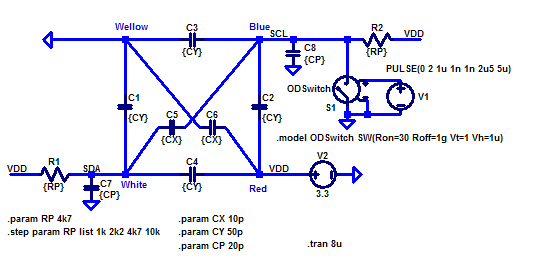 Model of cable with I2C signals on diagonal wires.

The resulting waveforms are shown below.

Simulated waveforms for the circuit with the I2C signals diagonally in the cable. The pull-up resistor value is stepped through the values 1k, 2k2, 4k7 and 10k. The smaller the resistance, the steeper the edges.

The simulation matches the measurement well also in this case.

So the method of placing the I2C signals far away from each other in the cable is apparently effective, just as expected.

Below is an oscilloscope plot of an I2C bus that is run through 2.7 m of cable. 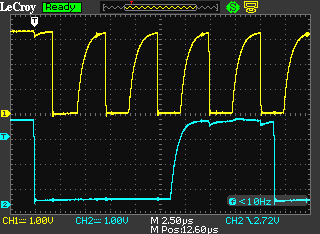 As expected, the amplitude of the crosstalk has remained essentially the same while the edges are less steep due to the added capacitance.

I hope this article has provided some intuition about – and insight into – I2C crosstalk in cables and what to do to control it.

This blog post describes an issue I am having with the XBee 2.2.3 Python package where the callbacks that are supposed to happen when new packets are received suddenly stop. I managed to find the reason for this as well as an at least temporary solution.

A bit of background

I just tried to add a second node to my small ZigBee network (now consisting of a coordinator and two routers) and ran into a bit of trouble. The new node has a new version of the XBee radio, namely XB24CZ7PIT-004. This has replaced the previous product XB24-ZB from Digi and it has a new firmware which simultaneously supports coordinator/router/end point. So one does not have to upload a firmware specific to the role the radio is playing in the network. Maybe it has other subtle differences as well. I do not know if the new radio version is relevant to the problems I am having, but I thought I’d better mention it.

I use a callback function to receive the data from the XBee, but the problem is that when I added the new XBee (as a router), I just got one or a few packets back from the coordinator (which is the one I talk to using Python) before callbacks stopped. I discovered that a new error callback feature had been added in 2.2.2, so I made use of this to try to troubleshoot:

This gave me the following printout before receive_data callbacks ceased:

So apparently a “new” kind of packet with frame type A1 has started to show up for some reason unknown to me. This turns out to be a “Route Record Indicator”. I have not looked into why this happens, but since the A1 frame type is not defined in the api_responses dictionary in zigbee.py and there is a new except-clause with a break in the definition of run() in base.py, I think the thread that receives data from the XBee and calls the callback function thereby terminates when such an unrecognized frame id is received.

I do not think this is appropriate behavior in this case. The thread should not die just because an A1 frame ID appears. I solved it quickly and in an ugly manner by commenting out the troublesome break in base.py:

There are probably better ways to solve this. Maybe the A1 and other possible frame IDs (see the API frame specifications section in the XBee User Guide) should be added to api_responses in zigbee.py.

I sometimes use VLC as an mp3 player and it would be nice if it did automatically load my default playlist when it starts. It is not apparent from the settings within VLC how to accomplish this, but some googling brought up an old blog post from 2007 that explained how to do it. Sort of. The information was outdated, but the remaining piece of the puzzle was provided in one of the comments.

This is how to make VLC automatically load a specific playlist:

Note that there shall be three slashes after file: and that the slashes shall be forward (/), not backward (\) as is usually the case in file paths on Windows.